SODAQ’s ONE (previously called the LoRaONE) is tiny- just 4 x 2.5 cm. In small quantities, it is priced at around €95 (about $150) so it’s not the cheapest option. It comes with an Arduino compatible processor, a Microchip RN2483 modem, GPS, and a number of other sensors that makes it a fully featured choice.

Requirements
Similar to all radio transmitting equipment, the SODAQ ONE should not be operated without an antenna.

Limitations
Due to an issue with the Microchip module currently, only ABP join is possible. 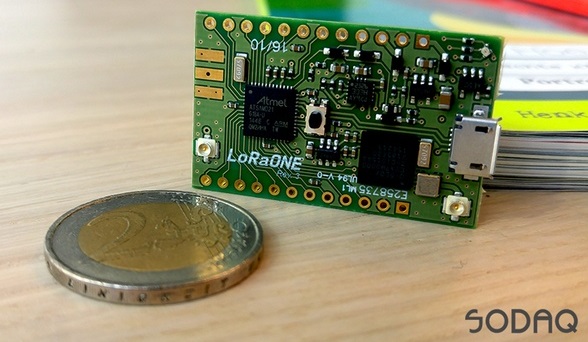 Configuration
1. As a one-off, the channels of the Microchip RN2483 modem need to be configured. To do this, download Kotahi_Config.ino (from Dropbox) and in the IDE use File > Open to open it. The IDE will prompt creating a sketch folder and moving the file- accept that. For future convenience, shift the created folder to the Sketchbook.

Upload the file to the board and, once done, open the Serial Monitor. It should display the channels being configured and end with the status of each channel. Check channels 0 to 2 and 11 to 15 have a status of 0 (off) while channels 3 to 10 have a status of 1 (on).

2. The demo code KotahiNet_SODAQ_testconnect.ino can be downloaded (from Dropbox) and imported into the IDE similarly. Upload to the board and it will send 10 test data frames to KotahiNet’s gateway.