LPWAN solutions are largely complementary to existing connectivity options such as cellular, wifi, and a large number of low power/low range technologies.

The best open specifications network model currently available globally is from the LoRa Alliance, called LoRaWAN (Long-Range Wide-Area Networks). Members of the LoRa Alliance include IBM, Cisco, Actility, and a number of leading telcos including Swisscom, KPN, SK Telecom, Bouygues, Proximus, and FastNet. LoRaWAN networks are being rolled out in many countries. As an industry pioneer, KotahiNet brought this leading technology to New Zealand and Cook Islands. 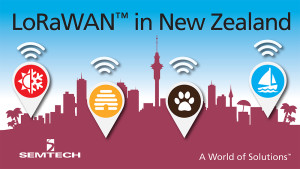 The key features of LoRaWAN are:

1. The network is divided into a large number of local networks, each serviced by one or more gateways.
2. Each local network can cover a radius of 3 km in dense urban areas and 20 km in open rural areas.
3. The number of connected objects per local network depends on various conditions and the gateway capabilities. Typically, this varies from hundreds to tens of thousands per gateway.
4. Suitable for low power devices, such as battery operated.
5. Supports bi-directional communication from and to connected objects as well as multicast.
6. Typically laid out in a star-of-stars topology.
7. Gateways are a transparent bridge, relaying messages between connected objects and a central network server. Gateways are connected to the network server via standard IP connections.
8. The network server manages the data rate and RF output for each connected object individually by means of an Adaptive Data Rate (ADR) scheme.
9. Data rates range from 0.3 kbps to 50 kbps. This is plenty for the low bandwidth requirements of most Internet of Things applications.
10. Three layers of encryption are employed- at network, application and device.