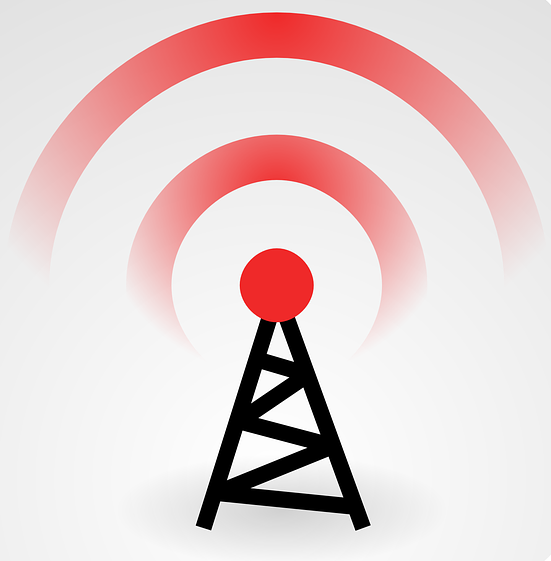 IMPORTANT UPDATE: KotahiNet’s band plan as detailed in this blog post is no longer used. While the reasons for choosing the band plan within 864-868 MHz remain the same, the current band plan aligns the specific frequencies used with that of the Indian market. Our reasoning is detailed in another blog post.

There have been a few questions about the frequencies KotahiNet uses and why. This includes pointed questions and an inspection by the good people responsible for its management in New Zealand, the Radio Spectrum Management (RSM) office.

Operating at MHz rather than GHz frequencies has advantages in terms of better coverage. Within the sub-GHz range, the interest from network operators for LoRaWAN (and other similar wireless) networks is to use public spectrum so that there is no explicit cost or licence necessary. According to the latest regulations (updated 28 January 2016), the three practical bands are 433.05 to 434.79 MHz, 864 to 870 MHz, and 915 to 928 MHz.

Besides the varying conditions imposed on these three bands, the two major factors to evaluate the best option are noise and alignment with global bands. Noise in the radio spectrum can vary geographically in New Zealand which implies that compromises may be required to operate at a uniform national frequency.

The second major factor is to align with specifications so that a global supply base is available. In hardware, prices are highly dependent on volumes and it is almost impossible for any New Zealand company to operate outside of international off-the-shelf equipment availability.

The current LoRaWAN 1.0 specification has four bands for Class A devices:

In summary, it is very difficult but not impossible to meet both LoRaWAN 1.0 specifications and New Zealand spectrum regulations. The only option is EU 433 MHz. While it is attractive in terms of being able to buy from Chinese suppliers at low prices, in practice it is impossible to run a carrier grade network in New Zealand with any sort of reliability in that band.

The problem we have is not unique. Many operators outside the LoRaWAN 1.0 spec countries of EU, USA and China are facing the same issues due to misalignment of public ISM bands globally.

With New Zealand’s band 915 to 928 MHz, is it a good choice to adopt Australia’s band and use equipment tailored for their market?

Therefore, within the narrower band of 920 to 928 MHz, New Zealand operators will be able to use LoRaWAN equipment meant for Australia rather than the whole Australian 915 to 928 MHz band. The only condition is to ensure the equipment does not exceed the unwanted emission limits specified by New Zealand radio regulations.

On the downside, there is quite a bit of noise in the 920 to 928 MHz band  in New Zealand due to pre-existing usage. For example, there are already over a million smart electricity meters operating in these frequencies.

For those who want to use this option, a note of caution. There are a number of suppliers selling “LoRaWAN 915 US/Aus/NZ” equipment. Some of these can be configured to operate only in the New Zealand band of 920 to 928 MHz and can therefore be used. Despite the labeling, many of them can’t be so configured and are therefore illegal to operate in New Zealand. 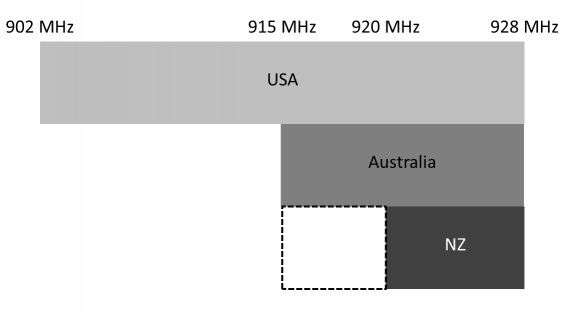 Since there is configuration required for international off-the-shelf equipment to meet New Zealand radio spectrum regulations in any case, our approach is to use the 865 to 867 MHz band where there is less noise. This is based on the wider EU ISM band 863-870 MHz. However, since KotahiNet does not operate at the three mandatory EU spec frequencies of 868.1, 868.3 and 868.5 MHz, it is not strictly compliant with LoRaWAN 1.0 specifications. 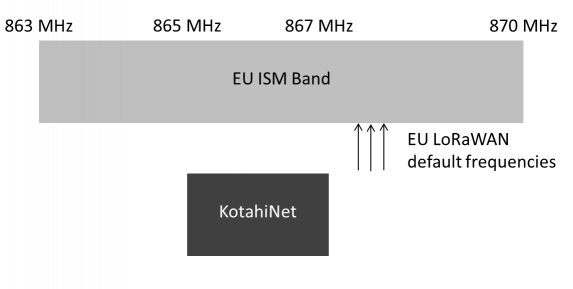 KotahiNet’s choice of band plan has the following implications for customers:

You may also be interested in Low Power Satellite IoT