What’s the network good for? 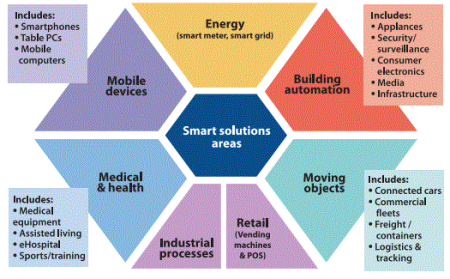 Low power, long range networks purpose-built for the Internet of Things are relatively new. It’s therefore interesting to see how people and network operators in other countries are planning to use them. Applications are mostly similar but the differences are worth a look.

The illustration for this post is from a brochure of The Lace Company. They recently announced, “The Lace Network covers more than 30 million people across 9,000 square kilometers, and is the first and largest LPWAN to target coverage in Russia.”

Two differences between what they promote and KotahiNet’s views on low power, long range networks stands out.

Firstly, moving objects. At this stage, only location in areas the size of cities or regions should be promoted as cellular coverage is still superior. “Commercial fleets” for example tend to be nation-wide. In this early stage of network roll out, low power, long range networks are better for locating say pets or bikes rather than fleet management.

Secondly, mobile devices. This may just be a question of terminology but I don’t consider smartphones, laptops, tablets, etc. to be a part of the Internet of Things. In any case, these powerful devices aren’t going to need low power networks.

What’s missing? From a New Zealand perspective, the most obvious ones are two attractive opportunities in our top three- agriculture and environmental monitoring.

There’s a few more but this should be enough to show how low power, long range networks are going to be used in similar areas (based on its inherent strengths) but will also differ to emphasise the opportunities and needs of varying countries.